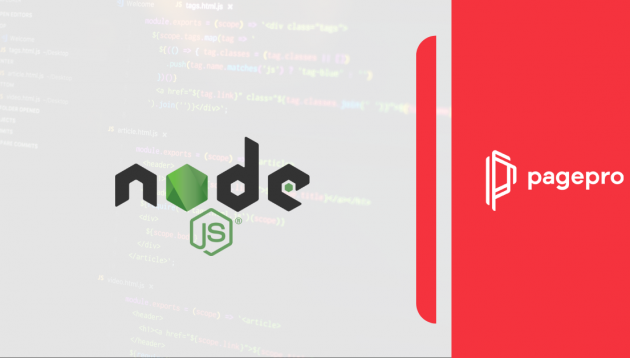 Building fast, scalable and maintainable web applications is a challenge — no doubt about that. The number of lines and requests will grow exponentially in a blink of an eye, and you should prepare for that beforehand. Preparation is often about choosing the right tools for the job.

And Node js development services may be the right choice on your way to success.

Node.js is a JavaScript runtime environment that’s open-source, cross-platform and allows for executing JavaScript code outside the browser. What makes it so performant and fast is its engine — JavaScript V8 developed by Google, which powers Google Chrome. It also means that programmers can use JavaScript for both front-end and back-end development.

Node.js uses an event-driven, non-blocking I/O (input/output) model, which makes it a perfect choice to build server-side web and network applications. Such applications are modern, lightweight, and effective; however, it doesn’t end here. Modules that work with file systems allow developers for creating scripts that automate various tasks. Because of that, not only programmers will benefit from choosing Node.js but also DevOps engineers and system administrators.

To sum up, Node.js provides everything you need to execute any program that has been written using JavaScript as a standalone application.

What can you build with Node.js?

There is almost no limit to what can be done with Node. However, there are some kinds of projects that Node.js is extremely good for. Especially those requiring real-time communication.

Take a look at examples below:

API stands for Application Programming Interface and is responsible for communication between databases, services or software applications. Thanks to a large and engaged community, there are many ready-to-use modules, so you don’t have to build everything from scratch. For example, if you want to build a REST API, you can do so with Node.js and Express.

Doing the same things again and again and again is often something that you can automate. What you may need in such a situation is Command Line Interface (CLI). Thanks to this tool, tasks like running tests, migrating data or building reports won’t require your attention anymore and will start running in the background.

Thanks to the specificity of Node.js, it’s possible to handle data of any site without risk of running out of system resources. However, you would need something like Node.js Streams. Until not a long time ago, it was quite hard to use them or even understand them, but that’s over. There are a lot of packages out there provided by contributors that make working with Node.js Streams much easier.

Have you heard about Netflix? It’s a great example of streaming applications. Thanks to them, it’s no longer necessary to download video files to watch them or audio files to listen to them. Node.js Streams, same as I mentioned above, allow for transmitting a vast amount of data in small fragments, one by one.

Node.js and Internet of Things fit perfectly because while IoT applications become more and more extensive, Node provides technical solutions to handle growing real-time data stream. Also, Node.js is supporting the MQTT protocol that enables IoT devices to communicate with each other.

Microservices is a concept of building one, sizeable application as a set of smaller services. Every service is independent and serves one, specific purpose like payments or notifications. Such services are interconnected and communicate with each other, which makes the whole application to work correctly.

It’s possible to create real-time multiplayer and online games using Node.js because it allows for real-time communication between the clients and the server. Because of that, players will be able not only to play in the browser but also communicate with each other. However, you would need tools like WebSockets or socket.io or both.

Games mentioned above are like an extension to real-time chatbots and chat applications. Building all real-time applications with Node is possible thanks to its Event API, which is responsible for instant notifications inside the app. Also, installing WebSockets will allow for using an open connection to exchange messages both ways.

It’s an application that works within the browser and which doesn’t require reloading page every time the user interacts with it. SPA provides native-like feeling because using it feels like using an actual application. Facebook or Gmail are great examples of such applications.

If you are wondering why Node.js is a great choice to build Single Page Application — it’s because it was written in the same language as many popular JavaScript frameworks like ReactJS. Developers tend to choose JS frameworks because of their development speed, scalability and efficiency.

It sort of is a natural choice to go with Node then — because using just one programming language (JavaScript in this case) makes the development process much easier and faster.

Why should you choose Node.js for web development?

After a short introduction to Node.js and pointing out what’s possible to build using it, it’s time to take a closer look at its benefits.

Node.js is not some hot technology trend that will be forgotten next year. On the contrary, it’s been available to use since 2009, many companies had a chance to use and test it, and most common mistakes or problems are already solved.

Since it’s written in JavaScript, you can reuse previously written code on the front-end layer, back-end layer and between different components.

Choosing Node means that you can use Node.js package manager (npm). It’s a collection of open-source JavaScript-related tools you can use in your projects. In other words, if you want something done, there is a huge chance you don’t have to build it from scratch.

Node.js is scalability-friendly by its nature because it’s lightweight and can handle a large number of simultaneous connections and HTTP requests. As a reminder, it’s an excellent choice when it comes to building microservices.

Node.js owes its speed to its V8 engine, non-blocking I/O and event-based model, asynchronous request handling and using single-threaded event-loop. All these things can lead to decreasing, for example, response time — and this was the case for PayPal. After migrating from Java to Node, PayPal noticed a 35% drop in response time.

Node.js makes it possible to choose and use a single programming language to build both front-end and back-end layers of the same application. So instead of hiring two specialists, it may be enough to hire just one full-stack JavaScript developer. Consequently, it will save you both time and money.

Some well-known brands have already decided to choose Node. Among them are: