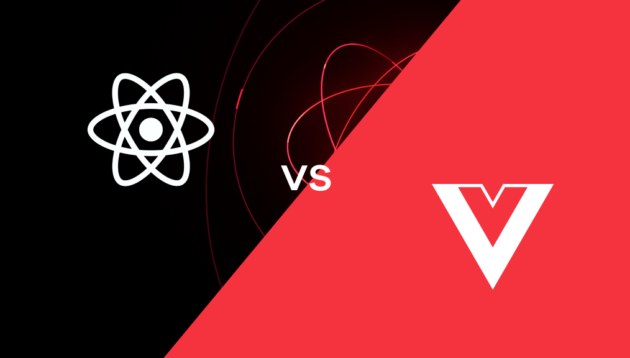 Nowadays JavaScript frameworks are vital for app development and many people struggle to choose between React and Vue for their projects.

Despite many years of discussion, choosing a clear winner is not an easy task as both of them have pros and cons. We’ve prepared this guide to help you choose between React vs Vue and understand which one suits you best.

React.js is a mix of simplicity and intense concentration on UX (user experience). However, you would need third-party solutions because React is responsible for just the View layer of the MVC model. For some developers, it’s a benefit because it allows for total freedom while choosing Model and Controller libraries.

The motto of React is “Learn once, write everywhere” as there is the possibility of reusing the existing code in other projects in any way you like.

Pros and cons of React.js

If you want more detailed information on the pros and cons of React, we recommend reading this article.

Vue is a progressive JavaScript framework that developers can use to build user interfaces. Contrary to monolithic frameworks like Angular, Vue is incrementally adaptable by design.

Similarly to React, the core library is focused on the View layer only. But if you want to integrate Vue with other libraries or existing projects, there’s no problem at all.

Vue.js can be characterised simply by three adjectives:

Pros and cons of Vue

Still not sure which framework to choose?

We have to remember that Evan You, the Vue creator, used React as a source of inspiration, so they have some similarities, like:

Vue.js is using two-way data binding. Whenever you change any element of the interface, your model state changes automatically too.

This sounds simple, but if you work on a large project and want to have a good data overview and debug easier, it is better to use React with one-way data binding.

It renders the change in the interface element, only after the model state is updated first. And whenever you change the UI components, the model state stays the same with no changes.

If you use React and want to build native mobile apps working on Android and iOS, there is a platform called React Native.

It’s a massive benefit for experienced React developers because instead of learning a completely new technology, they can take advantage of existing skills to create react apps.

What’s more, with React Native it’s possible to reuse up to 99% of code between Android and iOS with React-like components.

Although Vue.js doesn’t have a dedicated platform like React Native, it doesn’t mean you can’t develop native applications.

Vue developers can use either Weex (cross-platform UI framework) to create React Native-like platform or a plugin called NativeScript, that allows them to write Vue applications and compile them to native iOS/Android apps. Another option is Vue Native, which integrates the benefits of Vue and React Native ecosystems and allows building cross-platform native apps.

However, React, and Vue have something in common here – during web app development, you can use Electron with both of them.

React vs Vue: JSX vs Templates

One of the reasons for the newcomers to choose Vue could be templates.

They are based on HTML and are easier to read and write to anyone that has been working with HTML before, especially when you come from an Angular environment.

React, on the other hand, have JSX that gives you a huge advantage of using all the bless of JavaScript language. It is a genius component made from markup and JavaScript logic in the same file.

The choice between HTML templates and JSX depends on personal preferences. JSX can feel more flexible and powerful, especially in the biggest projects. And in the same time, with templates, Vue developers have a clear separation of concerns, which prevents them from injecting too much logic into views.

Before, React developers had to copy the files from previous apps or configure everything from scratches. It didn’t take loads of time but was a rather boring task.

On the other hand, there’s Vue with its own tool – vue cli, which enable quick project creation. Vue cli has many benefits, like adding plugins anytime during the project or easy improvements.

React uses JSX, which is a syntax extension to JavaScript. It can be used to describe how the user interface should look like. It’s a relatively new approach that React developers need to learn and adapt if they want to use it daily.

Another issue is that in the case of React, using third-party components is almost inevitable. And developers need to learn how to do that.

Vue.js is easier to absorb than React. If you decide to go with Vue, you can use either standard HTML, CSS, and JavaScript or JSX as in the case of React.

The critical thing about Vue is that it adopted the best concepts of React and Angular. Because of that, the experienced developers in either of the two technologies have some advantage here.

Documentations of React and Vue are both well-written, but the latter is considered slightly better.

Which framework do you prefer?

React clearly won this battle. It’s not surprising that it has a bigger community and popularity because Facebook stands behind this technology. On Reddit, React community has over 293k users.

Vue community is a little smaller, with fewer resources and packages, but it is maintained by the creator, Evan You and his team. On Reddit, their community is “only” about 82k.

To back up this claim, I prepared some numbers collected from Stack Overflow, stateofjs, Google Trends and npm trends. Check them below.

In 2021, React.js was the most commonly used framework. Vue took sixth place.

If it’s about the most Loved vs. Dreaded web frameworks, both JavaScript frameworks have similar results.

But React is still the most wanted web framework by experienced developers. Vue is in the second place, but with about a 10% loss.

Google Trends: Comparison between React vs Vue in the last 12 months

Google Trends: Comparison between React vs Vue in the last five years

The last criteria is the package download in the last 12 months.

To conclude, React is much more popular and used in the developer’s community, which means bigger support and more ready-to-go solutions.

If you want to make a decision based on performance, I have to disappoint you – both React, and Vue.js can be proud of their similar, remarkable speed. However, if you would like to see specific metrics and numbers, you can go there.

Both React and Vue are powerful tools, ready to create complex apps and web solutions. It all depends on your preferences and the project you’re working on.

On the one side, we have Vue, which is smaller and faster, ready to create simpler projects anytime. On the other hand, there’s React, which offers more flexibility for more complex apps. React is also easier to test and more relevant for mobile app development. And you always have huge support behind your back.

Still not sure which framework to choose?

React vs Svelte – Which is better for your business in 2022?

React JS vs Angular – which one to choose?

React Native vs Flutter – what’s better for a cross-platform app?

Pros and Cons of NextJS