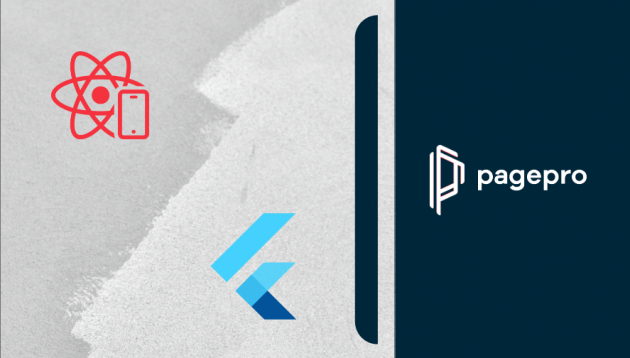 Demand for mobile app cross platform development is increasing. People are constantly searching for more optimal solutions such as React Native or Flutter, where they can create iOS and Android apps using one codebase only.

While using a single codebase for two applications, you do not have to invest double time, effort, and amount to create one app which is to be implemented on two different operating systems.

Many solutions have been created to deal with these scenarios but two attracted most of the audience — React Native made by Facebook and Flutter made by Google.

These two platforms have their own pros and cons which gives them an edge over others.

Flutter and React Native allow developers to build cross-platform applications by using a single programming language. React Native has been in the market much longer. As compared to Flutter due to which this platform is a lot more matured and has developed its own community and fan base.

Facebook’s product, React Native is a lot more mature as compared to other choices such as Ionic, Xamarin, PhoneGap, etc. It has a strong community that provides solutions to all sorts of problems.

At this point in time, React Native is renowned as the world champion. This powerful Javascript framework is built using React library which allows you to develop iOS and Android apps using a single codebase.

People actively use it all over the world and most of the organizations made it their premium choice for their mobile applications.

Funny thing is that Facebook started as a hackathon project in 2013, but in 2015 it became public for the masses.

Flutter is the cross-platform framework that develops mobile applications by using Dart language.

Both the language and framework are developed by Google and a lot of efforts and time were invested so that desired applications can be created in the easiest way which serves their purpose completely.

In 2017, the initial alpha phase of Flutter was started which makes it a lot younger than React Native.

Though it is new, its features and competency made it a prominent choice in much less time.

Our friends also wrote an interesting blog article on how Flutter Mobile Development Will Completely Transform the Market that you will definitely find useful.

We will be having a look on a few advantages and disadvantages which (I hope) allow you to make a wise and calculated decision.

Both the platforms are strong enough to be used, but there are certain features that may work better for you while others need to be considered before you will make your decision in that regard.

While talking about cross-platform applications, their performance and User-interface is considered as the biggest challenge.

You have to provide a seamless experience which the user has while using the native application.

While working around the platform of your choice, developers need to make sure that their product provides quick performance, pixel perfect design, and intuitive navigation.

If you are using Google’s platform or Facebook’s you need to consider the efficiency of how you communicate with the native modules.

In the case of React Native development, the app’s performance slows down as JavaScript needs to bridge, in order to carry out the functions, while in Flutter, Dart is built with necessary components that give immediate access.

We can clearly see that Flutter has an edge in providing a sharp performance to its users.

Most of the effectiveness of these platforms depend upon their user interface design and how things are made easy for the users and developers with the additional features provided.

Flutter provides its own sets of widgets which allows it to implement the design of certain platforms or to customize them easily.

While React Native only uses native UI controllers, though it has an additional ReactJS library which is also rich in UI elements. If you remove this library from the platform then you leave React Native with almost zero UI elements at our disposal.

So, in the case of UI and UX, Flutter is surely winning the game.

React Native is based on Javascript which is known by the masses whereas Flutter incorporates Dart which is relatively new and has a limited set of developers as compared to the former one.

Mobile developers can easily master JS and develop the desired product in a relatively less amount of time. Finding a programmer for the project would also be much easier as the talent pool is vast.

React Native also supports the massive collection of libraries and ready-made components which make the job a lot more easy. More than that, the reusability of React Native components makes you save a lot of time during the execution phase, and shorten your product time-to-market.

According to this aspect, RN scores the point.

It is clearly stated that React Native is more popular and widely used due to its feasibility and extensive support, but it does not mean that Flutter lags behind.

Flutter is new as compared to RN but soon it is may going to make the buzz due to its features and efficiency.

React Native is currently more stable but we can surely see the growth curve of Flutter too, it is simply a matter of time when both these platforms will have their own significant set of audiences.

These both are ideal choices to develop applications in a timely manner while being cost-effective solutions.

Every application requires different points to be considered, so the decision entirely depends upon the organization and the developer.

At this point of time, no one can predict the future regarding the winner but we can wait and watch how things turn and which platform provides more competent solutions to the problems.